It happens to me when I call (well really when I don't call) my mom.  I will realize that I haven't called in a week or so and think "oh, I need to give my mom a call"  then a few days later I start thinking, "gee it has been too long since you called your mom.  What if she is mad that you don't call enough?"  So I put off calling for a few more days... then I am downright scared... "I can't call now" (the next part makes no sense) "I haven't called in too long."

Sanity may not be my strong suit but that is sort of what I have been doing with my blog the past several weeks.  Sort of thinking "what if all of my blogger friends think I am a blog slacker?" Or "I am sure that everyone forgot about me anyway."  Add to that I have had a ton of things going on and haven't been able to focus very well,  I will cover some of those...

A lot of people that I know have notebooks or neatly filed index card boxes that they keep their recipes in... me I have this blog and well junk like this... 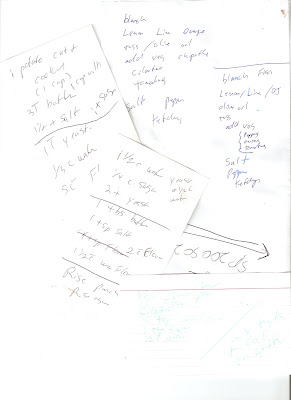 These were actually recipes that I had clipped to my refrigerator door, it is pretty normal for me to scribble ingredients on one side of a note card and instructions and notes on the back things like "rise, punch, rise" or "add veg" come up often, they make sense at the time.  I know that my notes are peculiar, not only do I look at them a few weeks later and have no idea what I was saying I can't always read my own writing.  A few days ago I was looking for my bbq sauce recipe and started poking around my blog to find it when my adult attention deficit disorder started acting up and I started reading my favorite entries and realized a couple of things
1. I am kind of a dork
2. I like my blog
So I am going to catch you all up a little...

In the past few weeks...

One day I was leaving work early (you know after only working for 9 1/2 hours).  My boss said that he would walk out with me.  When we got out to the parking garage he told me that his boss has always wanted to fire me but he never really got around to it and some of my coworkers were out to get me.  The next day he called in sick then disappeared... seriously he never contacted any of us, none of us are sure what happened to him. 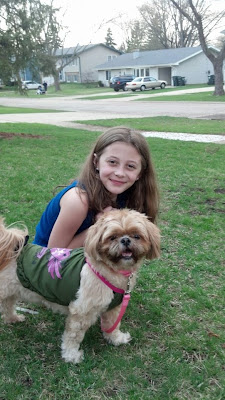 We got a new fish for Mr. Man, his name is Mr. Blue 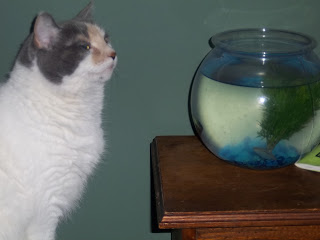 A few days later Kris called me to say that her contract was up in a week, so she was a few days from unemployed.

Mr. Blue died... Mr. Man CRIED at the fish funeral, when we buried him in the garden under the mint.

After not working for a week and a half Kris got a good job offer.

I lost a library book (I know bad) the worst part the cost of this particular book $120.00!  I BEGGED for some dispensation but no luck there.

I finally got around to getting the cat (the one that hates me) fixed... this is what Miss Lu's room looked like once I finally got her into the carrier 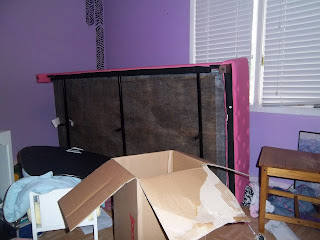 I had two interim GMs at work each of them a little...  Maybe it is best that I don't finish that thought.

When he was emotionally ready Mr. Man and I went shopping for a new fish... enter Mr. Dark Blue.

I have still been playing in the kitchen and taking pictures so I have some stuff ready to go.  I have just been... well spent.  Some days I can't even bring myself to hit the "like" button on facebook let alone write an entire post on my blog. 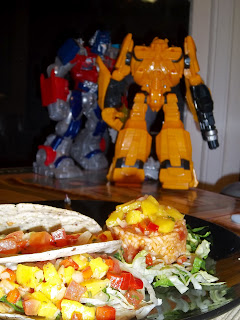 At work my new boss started,  She seems OK.

Mr. Dark Blue died... I stopped off at the fish store without telling anyone, enter Mr. Dark Blue Two still known as Mr. Dark Blue to avoid tears, we haven't told anyone about the switch so only Kris, I (and I suppose everyone with internet access) knows. 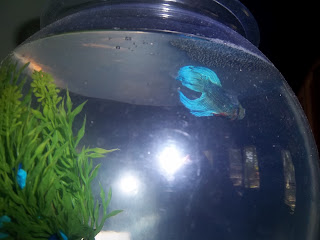 What I am saying is, if you are reading this thanks for letting me sort out my bizarre and annoying life and sticking with me through a sabbatical.
Posted by Bryan at 9:17 PM 3 comments:

Bryan
I have been in the food service/restaurant industry for over 20 years. I have worked in every facet in the industry from peeling potatoes in college to Executive Chef to Manager. I love cooking and want to share that with everyone.